In our heads we probably all think we look better on a horse than we actually do – I’m sure I’m not the only one who thinks I must look set to go down the centre line at WEG or the Olympics.

Then I see myself in the mirror (not that this happens often as schooling in a boggy field I don’t have that luxury!) or catch a glimpse of my shadow, and reality sets in and my heart sinks a bit.

I’d love to have posture like Charlotte Dujardin, or a lower leg like Piggy French. I don’t, so I have to keep working and hope one day I will get half way there. I also have to remind myself that even if someone is born with an amazing talent, they have to work at it to be top of their game. When it comes to riding, that means working on all areas of health, fitness and wellbeing at a pretty intense rate. Annoying though it might be – as it would be so fabulous to get on the horse and magically sit perfectly and apply the aids invisibly and correctly – what we do OFF the horse has an enormous influence on what we do ON the horse. If, like me, you are a one horse rider, this is even more so when you consider the percentage of time spent on the horse. It’s the same for lots of skills you really want to master.

An example from my past is from when I got my lorry licence. 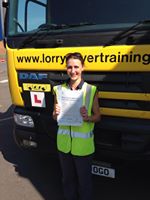 The company I trained with sent pupils out in pairs; it gives you a break from driving but also the chance to observe and learn from each other. Having had Pammy as my instructor for many years, I was totally used to being told something I did was essentially either good enough or not (please insert your own guesses for of terms used when NOT good enough). I like it that way – why be told something I’ve done is good when it was only ok? My driving instructor was the same, and with good reason. We had a test at the end of the week, and we were either good enough to pass it or not. However, the guy I was learning with couldn’t cope with that approach at all.

The thing he really struggled with the most though, was the concept that his regular car driving habits might influence his lorry driving. To me that seemed totally obvious; I’d been a car driver for nearly 15 years so would of course have lots of habits – good and bad – that I had developed. For my co-pupil though, he couldn’t get his head around how his day to day driving activity could be influencing his new lorry driving activity. I failed my 1st 2 tests due to my horrendous nerves – akin to the feeling before I try to show jump – and the ridiculous mistakes I made as a result. The plus side of this was that I did loads of practise, largely involving driving all the possible test routes whilst concentrating on doing everything correctly so that in the test situation I could just focus on correctly using the gear stick (fail 1), and not mounting the curb (fail 2). The result is that when I did pass I had hardly any minors, and I still remember the vast majority of the ‘good’ skills I learnt. Really, I am a much better driver because of the failures, because I had time to ensure the mew habits became embedded in my brain.

Our brains and bodies learn through repetition until tasks become routine and eventually habitual. Car driving/lorry driving or off horse posture/on horse posture – it’s the same. What we do all the time influences what we do part time in the saddle. So if we want to sit better, ride better, be more symmetrical in the saddle, we have to work at it out of the saddle. It also takes a LONG time to break habits down, then establish new ones. You need to have a plan, a bit of faith in yourself and some determination.

This can be a little daunting, so here are some tips for how to make those changes happen more easily.

A word of warning though – just as it takes time to embed new practises off the horse, it takes time to transfer that to on the horse. I might be able to do lots if Pilates exercises very well, but that doesn’t mean I am so good on the horse. But, I have given myself a much better chance by starting from a better point.

Keep at it and good luck.

I am a Chartered Physiotherapist with Pilates training, and I am an ACPAT (the Association of Chartered Physiotherapists in Animal Therapy) and RAMP (Register of Animal Musculoskeletal Practitioners) registered Veterinary Physiotherapist. Away from work I have ridden all my life, competing in various disciplines and now focussing on dressage. With my retired horse, Baz, I competed at Advanced level, and I now have a younger horse, Lizzie, who is currently competing at Elementary. View more posts